From the moment the curtain opens until the moment it closes, Stage Managers are there working from the shadows of the stage wings or in the dimly lit backstage to secure every set, prop and costume piece. Or perhaps they’re in a booth above the audience, calling both lighting and sound cues into a headset. They’re the stars of the show that the audience never sees.

“If you picture a theatre company as a wheel, and all the spokes are different departments, the stage manager is at the centre of all the information coming through,” says Sam Rose, an Ottawa-based stage manager whose credits include working for the National Arts Centre, the Great Canadian Theatre Company, and Centaur Theatre.

For each show she works on Rose will fill a 3-inch binder with lists, schedules, notes and of course the script, making sure that every department has what they need. But for Chantal Hayman (GCTC, National Arts Centre, and The Segal Centre for Performing Arts), being a stage manager is about much more than being organized. It’s her social skills that are her greatest asset to the job.

“You can learn how to make a spreadsheet, but you can’t always learn how to manage people,” Hayman said. During rehearsals, stage managers are meeting with all the different departments, and coordinating information between the director, actors, administration, the box office, and all the department heads.

Once a production moves to performance, they are working behind the scenes. Stage managers have a call time 90 minutes before every show to prepare for opening curtain. This could be anything from checking to see the laundry was returned to the dressing rooms or running a fight call for any stage combat during the show.

“It almost feels like we are performers as well. We come in and prepare and go through the motions of the show in our own way,” says Jacki Brabazon, a former Ottawa local who’s currently working as an Assistant Stage Manager at the Stratford festival.

In many ways, the career of a stage manager mirrors that of an actor’s, typically hired for contract positions. While it’s easy to imagine every actor having a dream role, the same is true of stage managers.

She applied to the Stratford Festival four years in a row and never heard back, but after years of continuing to apply, she now works as an ASM at the Festival. “It was kind of a pie in the sky idea that I never thought would be acceptable, and now it’s real life,” she says.

Stage managers are a part of the Canadian Actors’ Equity Association, but before they can join they must earn enough credits as an apprentice. Apprenticeships require the completion of six credits from at least two theatre companies, or nine credits with the same company.

“Getting your foot in the door of that first apprentice credit is sometimes the hardest part,” says Hayman. The program is designed to see if you can get continued work she said. Joining equity offers Stage Managers protection, such as a minimum rate of pay, to provide longevity in the business.

“Unfortunately, this is a business that can often take advantage of people who are not represented by a union or an association because a lot of people get into because they just love it,” Rose said.

Rose knew that joining equity would ensure that her career would reach a certain level. But that doesn’t come without a passion for the art itself. You must have a passion for it, she says, because of the number of hours and long weeks you put into a performance., Rose says.

As a general rule, Hayman considers three things before accepting a contract:

If you can say yes to two of these three things, it’s probably a gig you should take, she says.

Stage managers are heavily involved in any job they take on and often assist in facilitating the production. However, there is an unspoken rule amongst them keep creative opinions to themselves until they are asked. Some directors will prefer to have a collaborative relationship with their stage managers and ask for their input, but it varies for every production.

“I have experience working on shows where my concerns have fallen on representation and making sure that the final product best represents the community,” Brabazon said. Portrayals of inappropriate actions or the use of unfair wording are examples of red flags for Brabazon.

“Those are times when I wish I was in a position where I felt more comfortable speaking up creatively,” she said. In the past, she has found that serious concerns are usually addressed by someone else anyway, and if they aren’t discussed, there are ways to pass information to the director anonymously.

But sometimes, stage managers find issues that extend beyond the community, and they can only be addressed openly and honestly. Four days after Iris Winston’s infamous “#MeToo” op-ed was published by the Ottawa Citizen, Rose posted an open letter on her Facebook page responding to the Winston article.

“When Iris wrote that article, it finally hit too close to home for me,” Rose said. “I need to stand up for other people that are in my industry. And not just women, but men too.”

Rose only intended for her friends and colleagues to see the letter, but her original post has more than 30 shares and over 300 likes. Since then, she has received messages of praise and thanks for her words.

“If I didn’t know why I was writing it, I think afterward it became clear,” she said.

It will get harder before it gets easier Rose says, but she believes change is on the horizon, and soon it will be common for people to apologize openly. As well, many theatres have begun to rewrite their policies related to sexual harassment. 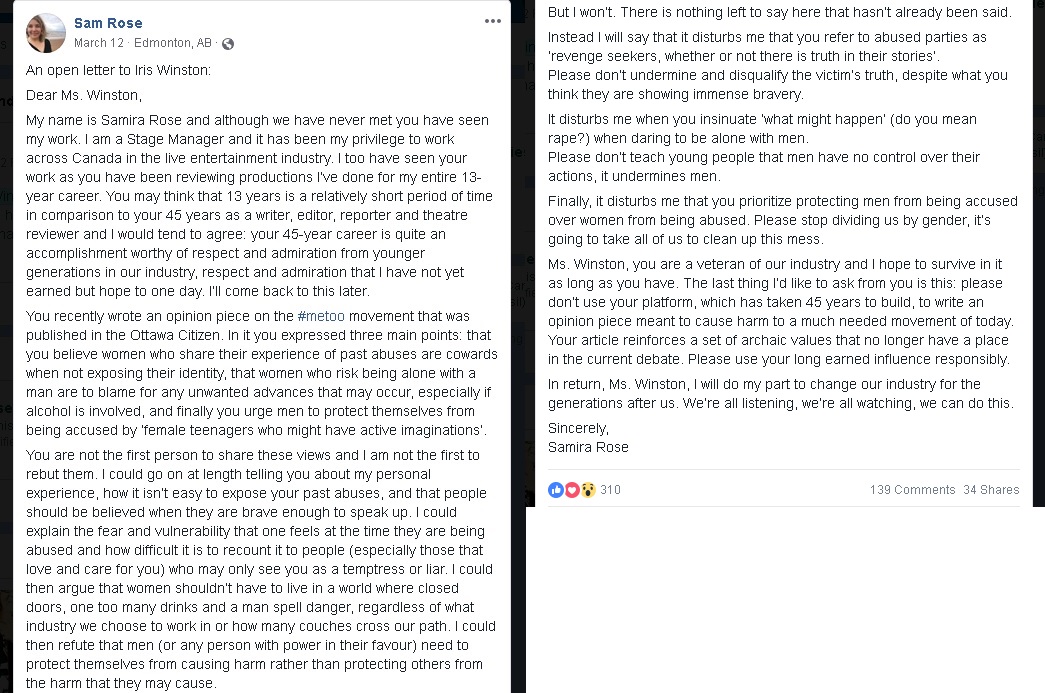 Whether it be through a massive social media movement or a quick lighting call through the headset, it’s the stage managers that make sure the stories in theatre are actually told.

Edited on July 20th- an earlier version erroneously listed Brabazon as a Stage Manager when her official position title with the Stratford Festival is Assistant Stage Manager.

Tamara LaPlante is a student at Carleton University, going into her fourth year of the
journalism program. Most of Tamara’s theatre credits come from her work with Sock ‘n’
Buskin Theatre Co., a student-run theatre company at Carleton. Tamara believes – whether it be on the stage, or in article-form – that everyone has a story to tell.