Agent Madeleine by Chelsea MacKay is an exciting historical drama about the incredible life of Noor Inayat Khan- the first female wireless operator renown for her actions working with the Special Operations Executive (SOE) as a secret agent in German-occupied France during WWII. Given the depth of the material presented to us, Rainy Hearts Productions should be a knock-out; however, with its current staging the pace of the text is weighed down to the speed of molasses which, unfortunately, sucks out a lot of the thrill inherent in this story. 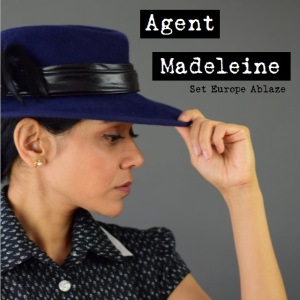 At risk of going into too much detail about the actual historical context that inspired this play-text (though I do recommend perusing Khan’s Wikipedia page because she truly was a badass), I am going to quote the company’s own play synopsis which is a rather succinct and apt description of the show: “1844. War. In London, a secret government organization is given one command: ‘Set Europe ablaze’. Captive in a Nazi prison, Agent Madeleine fights to keep hope alive”. Thematically, the piece attempts to tackle questions about reconciling one’s beliefs with one’s obligations to your nation; the complexities of nationalism in regards to individuals of the diaspora; and, of course, gender and cultural stereotypes.

The acting in this particular production is actually quite good. Nicholas Dave Amott as Leo Marks balances both strength and tenderness in his portrayal of the 24-year-old head of SOE communications. Jessie Doucet does an admirable job of playing almost every other ancillary character to Khan’s story while dealing with constant and numerous costume changes. Marcel du Faye brings a lovely innocence to his performance, but he could certainly be pushed further in maintaining his presence on stage. Finally, Puja Uppal as the infamous Khan brings such a refreshing and expressive performance to the stage and she really seems to grasp the deeper nuances of this complex character. The interactions between Uppal and Amott really make up for the sluggish pace and are a joy to watch on stage together.

Unfortunately, the direction of this show leaves much to be desired. Agent Madeleine is hampered down by too many unnecessary blackouts that neither result in a changed stage space nor add anything significant to the performance. They seem to be there only to mark “chapters” in the story and really only serve to continually sever the viewers’ suspension of disbelief and cuts any tension (emotional, dramatic, or otherwise) that the actors worked so hard to build in the scene before. The wall flats that are used to represent the prisoner’s cells also weigh down the stage as the configuration of these flats never changes and often the actors have to play their scenes directly downstage of them and limits how much of the space can actually be used.

With a stronger directorial hand, Agent Madeleine has a lot of potential to be a stand-out production. That being said, even with its slow pace and undynamic staging, it’s definitely a show worth catching for the strong performances.