The Ottawa Fringe Festival just wouldn’t feel like itself without an annual offering from local troupe Dead Unicorn Ink(DUI). Going on 7 years now with their first showing at the 2011 Fringe Festival where Playing Dead, a zombie puppet show, to the stage and captured audiences’ hearts and, since then, have been regularly producing new work that strives to bring the genre of B-film to the stage. Best known for their unique stage props and nerdy narratives, their newest show A Girl in the Fridge is but a small tasting of DUI’s full potential. 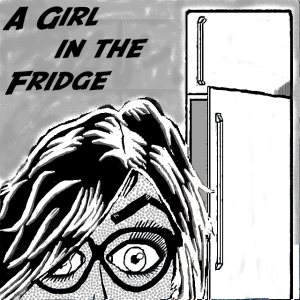 A Girl in the Fridge is a short piece (it clocked in at just under 40 minutes when I saw it on opening night) about the relationship between Eve and Xander who are, by all intents and purposes, just a regular couple. Eve is a graduate student who’s writing her thesis on the literary trope colloquially known as “Fridging”, which has seen numerous female characters murdered, maimed, or assaulted in order to provide the proper motivation for the male protagonist; and Xander is a pizza delivery driver who’s also participating in scientific studies for extra cash to help support the two. When mysterious happenings start occurring and it appears that Xander might be at the centre of them all, Eve realizes too late that she, herself, might just be the next woman in the refrigerator.

In all honesty, this show starts and ends strong, but everything in between still needs some more fleshing out. It’s always nice to see female-run theatre companies start producing material that speaks to women’s issues and the Women in Refrigerators trope is certainly a prevalent issue given the mass popularity of the Marvel and DC comic book conglomerates. However, the political commentary, as it were, isn’t yet equally balanced with the actual plot of the show and so it often treads more into lecture territory (and it’s not helped by the fact that a large part of the show is Eve actually writing and contemplating her thesis).

The ending sequence and imagery are powerful (the deep red lights and the throbbing bass of grandson’s Blood// Water), but unfortunately it is hindered by some bumpy fight choreography that slows down the entire scene instead of carrying us through to the piece’s shocking climax. Given my experience with this company’s work, it is clear that A Girl in the Fridge is still in its first few drafts. If you were to compare this piece with their most recent shows (Ten Little Sinners and Marvellous Man), you can see that there is a certain level of quality that hasn’t been reached yet. That being said, I think that the potential of this show is also clear and with a few more workshops this piece has the ability to transcend into something pretty special.

If you’re a fan of DUI or are just looking to squeeze a shorter show into your Fringe schedule, I do recommend checking out A Girl in the Fridge– it’s 40 minutes well spent!

A Girl in the Fridge