“Sir John A: Acts of a Gentrified Ojibway Rebellion” – a Review

Sir John A: Acts of a Gentrified Ojibway Rebellion is a play presented at the NAC from October 3rd to 14th, 2017. I had the pleasure of attending the performance on October 11th, which included a talk-back with the performers after the play. In the program handed out at the theatre, playwright Drew Hayden Taylor notes that he was approached by Jillian Kelly, NAC’s Artistic Director, to write a play about Sir John A. Macdonald. At first he was amused by the idea but then became more obsessed with the concept of a story that “came from the Aboriginal equivalent of an urban legend…” Based vaguely on a road trip of two Indigenous friends, Hugh and Bobby (played by actors Herbie Barnes and Darrell Dennis) travel to Kingston to find Macdonald’s gravesite in the Cataraqui Cemetery in Kingston. They plan to dig up his bones and hold them for ransom in exchange for the return of native artifacts stolen by the Europeans during their exploration of Canada. Specifically, Bobby wants his grandfather’s medicine bundle returned from a museum in England.

During the trip, Bobby and Hugh remind us of many topics that still occupy the minds of Indigenous people and the way Canadian settlers and explorers dealt with Indigenous cultural artefacts and land claims. Sir John A., played by Martin Julien, appears throughout the play in 19th century soliloquy vignettes to expound on the philosophy of the time during which these events occurred. The play is an ingenious vehicle for teaching us history. We quickly learn that Sir John A. is an alcoholic who hates Americans and sees himself as a paternal figure to the “Canadian Indians” commenting that at least the Canadian “solution” did not involve trying to kill them all, as the American approach did. He abhors violence or, as he comments, the solution that Americans have for everything: more bullets. Except for the graveyard scene when Sir John A. speaks to Bobby, all of his appearances in the play are personal conversations with the audience and the presence of Canada’s first prime minister felt real but also a bit surreal. 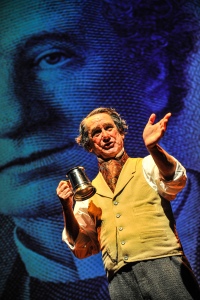 As Macdonald, Martin Julien is the epitome of our first Prime Minister. The fact that he looks so much like the portraits we have of that icon helps that illusion. I feel it is indeed Sir John A. addressing us from the stage. Julien embraces the role with such enthusiasm and delivers Taylor’s satirical and insightful lines with such conviction that it feels as if you are in the presence of the great man at a reception and sharing a drink at the bar.

Bobby attempts to get his grandfather’s medicine bundle back by appealing to the Canadian government and trying to get his Chief to champion his cause. Darrell Dennis portrays a man obsessed, but clearly focused on his goal. His intensity is balanced by his other road trip companions and he plays a great straight man for Hugh, his best friend, whom he recruits to accomplish his goal.

Hugh is the star. Herbie Barnes plays the character as a funny, teddy-bear-like character that breaks into song to relieve the tension and lighten the mood. In his version of the popular rock songs he sings, he always modifies the word “you” to “Hugh” to make the song all about him. For example he changes The Romantics song “What I Like About You” to “What I Like About Hugh”. I couldn’t help loving this irrepressible, jocular character who keeps the audiences in stitches throughout the play. He would certainly be first choice for my road trip companion.

Along the way, they pick up a hitchhiker, Anya (played by Katie Ryerson) who is also trying to get to Kingston. Anya, as a history dropout, was the one character that I felt was a bit out of place, except where she was a backup singer for Herbie’s rock numbers which benefited immensely from her strong female voice. She is a foil for Bobby and Herbie, but besides this she doesn’t add much to the story. Anya is great as a backup singer, but I feel the story is about Bobby and Hugh and their quest and therefore Anya’s presence seems like a distraction. Ryerson does put in a decent performance, but she is overshadowed by the other stronger characters.

The improbability that a road trip story about two Indigenous men and a dropout history major who meet Sir John A. Macdonald while singing rock songs would make any sense is somehow brought together in a comedy that is informative, educational and fun. In the talk-back after the show, the performers revealed that the information provided by Sir John A. in the play is historically accurate. Both Barnes and Dennis are Indigenous and coincidentally best friends, and their genuine camaraderie shines through on the stage. It’s hard to imagine anyone else in those roles.

The simple staging and multi-purpose props illustrate how good theatre can transport you to places without a lot of elaborate sets. For example, during the road trip we see both Hugh and Bobby in a car, but the car is really two lawn chairs for the front seats and a couch for the back seat, a steering wheel Bobby balances on his lap, and two tires, one on either side of the couch. Later, the pieces are quickly pulled apart and become separate chairs and a couch again. In addition, multiple props and furnishings, which quickly disappeared through fold-up walls without interrupting the play’s momentum, were an effective way to seeing scenes transform before our eyes like a fade out / fade in of a movie. I applaud the ingenuity of director Jim Millan and production designer Nick Bottomley for conceiving this set design. Projecting selfies on the screen at the back of the stage was also an effective way of reminding us how connected we are to the current method of recording road trips.

The play is an important addition to Canada’s cultural heritage. It’s a way to talk about painful stories from our past without assigning guilt to European settlers or their descendants. Perhaps this is a way to help us move on. Taylor has crafted a clever, humorous and touching story that should be shown in every major theatre in Canada and even be re-enacted in high schools and universities. I’m not sure how well it would play in the USA but I imagine it would be well understood in Commonwealth nations like South Africa and Australia. Our histories are not that different and we need to acknowledge what was done to Indigenous cultures by the colonizing settlers. This is a play I would highly recommend to everyone and I would suggest that it become part of all Canadian school curriculum to get children more excited about and involved in our history.

Ron Finnigan retired in 2015 and decided to go back to university to pursue and Arts/English BA. He is currently enrolled as a third-year undergraduate at Carleton University with a focus on theatre drama this year. His goal is to graduate in 2020 and then perhaps, like the Rubik’s Cube, start all over again.