“Educating Rita” is Relevant but Unfocused

Ottawa Little Theatre kicks off its 105th season with Willy Russell’s Educating Rita. The play centres around themes that are just as applicable to Ottawa in 2017 as they were when it first premiered in London in 1980, but the details of the script, such as the cultural references and English dialect, feel dated and foreign with the result that the production feels more distant and less timely than it otherwise could have been.

Educating Rita follows the year-long relationship between Rita, a 26-year old hairdresser from Liverpool who wants to improve herself by getting a real education, and Frank, an alcoholic middle-aged university professor who has only agreed to teach Rita’s Open University course in English Literature because he needs money for booze. As they meet weekly in Frank’s office and Rita’s academic prowess becomes more and more apparent, Frank sees her working class honesty fade into the academic pretension that drove him to drink in the first place, sending him on a downward spiral. 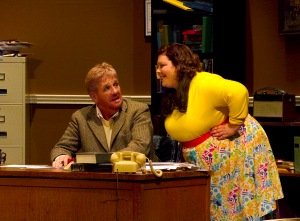 For all its particular Britishness, Educating Rita touches on issues that have continued relevance in today’s Canada: the social gap between those with a post-secondary education and those who do not, throwing aside traditional gender roles in favour of seeking true fulfillment (Rita’s offstage working-class husband would rather she stay at home and have babies rather than learn about E.M. Forster), the difficulty of identifying and treating addiction in a constructive manner, as well as the inherent issues with the administration of institutions of higher learning (when Frank drunkenly rants to an undergraduate class instead of delivering a lecture, he is put on a 2-year sabbatical rather than being fired).

However, given that this play was inspired by the social realities of British education in the late 1970s, there are several references that are specific to that time period that don’t have the same effect on a Canadian audience now. The Open University, for example, is a massive distance-learning program that has been running in the UK since the 1960s, but has no easily-identifiable counterpart in the Canadian education system. Cultural references such as Farrah Fawcett-Majors and Harold Robbins keep the script feeling very much 1980 instead of 2017.

This wouldn’t be a problem if this production of Educating Rita stuck to its guns and went full period drama with its tone, but this doesn’t happen, largely since the actors do not use the accents but still use terms like “taking the piss” and “sod off”. Had director Sterling Lynch gone instead with an updating of the script, replacing the British slang terms with Canadianisms and updating the cultural references, this script would feel much more like a story with contemporary relevance (and wouldn’t necessitate including a glossary, such as the one in the show program, or teaching actors to speak in dialect, which I acknowledge is usually a risky venture). I admit this would entail the services of a dramaturge and probably a protracted negotiation for the performance rights with Samuel French, but by taking the script at face value without bringing it closer to 2017 Canada or bringing the production closer to 1980 England, Lynch’s production feels unfocused. 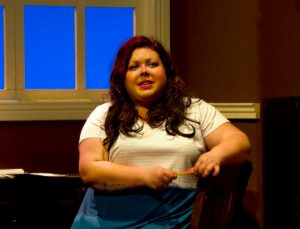 The production benefits from Rachel Hauraney’s excellent set design, with bookshelves full of organized chaos (and hidden liquor bottles) and stained glass window, as well as the jaunty piano interludes between scenes by Kenny Hayes. Allison Haley’s Rita is bold and full of energy, while Mike Kennedy’s Frank is a little more subdued and could perhaps benefit from catching some of Haley’s infectious excitement.