Meraki Theatre’s debut production, Tiny Dynamite, shows off the obvious talents and artistic instincts of its three members, though the production suffers from a lack of compromise with the practical drawbacks of its venue. 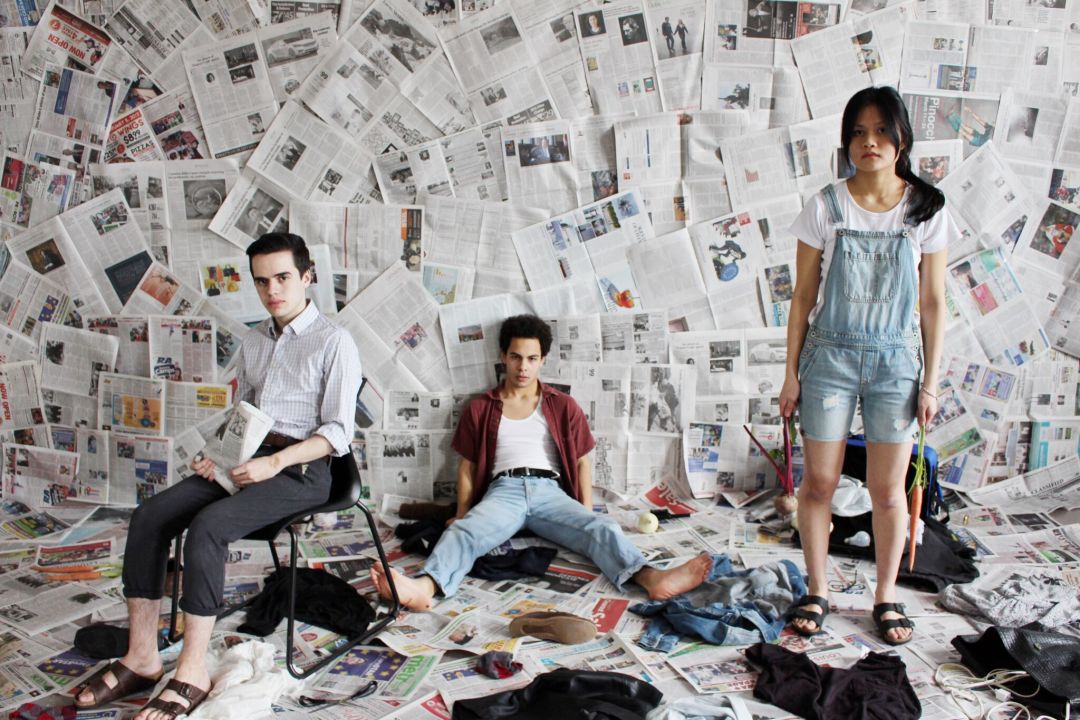 One of the three shows at this year’s Fringe based on a pre-established script, Tiny Dynamite was written by British playwright Abi Morgan (also known for writing the screenplays for Shame, Suffragette, and The Hour, among others), and produced by Meraki Theatre, a company composed of three young artists who have been part of Third Wall Academy (TWA), Third Wall Theatre’s youth program (TWA is producing another show at this Fringe, Caryl Churchill’s Love and Information).

Two young men who don’t seem to have much in common meet for their annual summer trip together: Lucien, a straitlaced insurance agent who works in risk assessment and sees life as a series of predictable variables, and Anthony, a troubled young man who seems to struggle with mental illness and homelessness (Lucien picks up the costs of their summer trips). One year their trip takes them to a lakeside resort where they meet Madeleine, a resort employee whose easy friendship reminds them a little too much of someone they knew in their past. As Madeleine spends more time with them, she watches helpless as Lucien and Anthony’s friendship breaks down over their friendship with her, and eventually the true nature of what happened in the past (and their reluctance to accept it) is revealed.

The training that Rafael Fantacci, Adrien Pyke, and Helen Thai have received from TWA manifests itself beautifully in their usage of stagecraft – with only two large crates, a desk, their own bodies, and a minimal usage of other props, nearly every new scene visually establishes its location before anyone even opens their mouth to speak, in such diverse locations as the hotel room, a cinema, the beach, and a nearby system of caves. The circular playing area, hemmed in by white Christmas lights, is visually striking, and adds to the sense of psychological confinement that Lucien and Anthony ultimately pull Madeleine into. The in-the-round setup occasionally leads to some sightline difficulties, especially at one point toward the end, when the characters stare at one another across the circle, necessitating each actor to stand with their back directly in front of seats in the first row. Additionally, the scattering of props on the floor, especially the newspapers that are torn up and strewn everywhere, seems like something of a safety hazard (whether walking or jumping off the crates onto the floor). Overall however, the stagecraft is striking and effective.

The acting is high-quality as well, a particular standout being Fantacci as the apparently disturbed Anthony. His wide-eyed innocence changes in a flash to rage, and he follows physical impulse well, especially at the moment where a restless Anthony gets up and starts yelling and dancing in the cinema: the change from quietly sitting to boisterous horseplay is so sudden that even Pyke and Thai seem caught off guard. The basement of St. Paul’s is draughty and full of echoes, so the raised voices and yelling become a little overwhelming – intensity over volume would be the way around this.

Tiny Dynamite is a promising debut from a company of young theatre makers. The subject material is a little darker than your usual Fringe show, but if you want to see the development of artists who will be continuing to create engaging and challenging theatre, now is your chance to start.