“Bless You, Bonaparte” Sci-Fi Revisionism in Need of Revisions

Okay, let’s get one thing straight: the program synopsis does not do Sad Ibsen Theatre’s Bless You, Bonaparte justice. While it certainly describes the outline of events that take place over the course of an hour, it in no way captures the fun and silliness that appear to run rampant throughout this new text. Unfortunately, this production is seriously bogged down by a lack of direction, with little to no comedic timing, and consequently loses a lot of its effervescence. 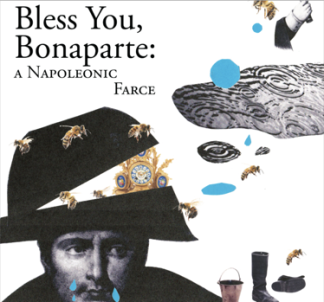 The basic premise sort of revolves around the concept of the Butterfly Effect where the smallest actions can change the course of the future. I’m a little confused as to why this show isn’t listed as being Sci-fi in the program because the decision to incorporate time-travel as a dramaturgical device certainly places it within that genre. In any case, the story follows the loyal but absentminded valet, Claude Pagaille, who has made the grave error of forgetting to pack the rainboots for his master, the great Napoleon Bonaparte. Now, suffering a significant head cold, Napoleon enters the Battle of Borodino with the strategy that ultimately results in the less than decisive victory over the Russians (the Battle itself is famously known as the deadliest day in the Napoleonic Wars with casualties reported at a staggering 70,000). Looking to change the course of these events, two mysterious agents in black intercept Pagaille and convince him to help them with their plans to recreate a definitive French victory. In the fashion of the classic time-travelling trope, things do not exactly pan out the way anyone expected and we’re left with the understanding that sometimes things are just meant to be.

Director Jonas McLean has made the decision to cross-cast these male historical figures as female performers, which I think is admirable, but a lot of the onstage acting leaves much to be desired. Carol Sinclair, playing the titular Bonapate, is actually quite good in caricaturing this incredible and iconic leader. However, the performers playing Pagaille and Napoleon’s lieutenant (their names are not listed alongside their roles in the show brief, so I could only place Sinclair), often rush and stumble through their text, throwing away lines and comedic moments meant, no doubt, to work in conjunction with Sinclair’s outrageous characterization. In this case then, Sinclair almost always appears to be overacting but I would argue that this is because she is literally trying to hold up the entire show herself.

Now, it was mentioned after the performance I saw on Tuesday that this was the first time they had performed with the entire cast together (one of whom was recovering from mono), so I guess some inconsistencies are bound to happen. Overall, I think this text (written by Ryan Borochovitz) has a lot of potential to become something fun and lighthearted (I certainly laughed out loud at numerous parts and was definitely impressed by the impromptu tap number), but in its current iteration, it misses the mark. While there exists no real way to turn back time (not yet anyways) and fix the issues of the past, I do look forward to seeing this show again if it is ever mounted in the future.