Lub Dub, presented by NickelPumpernickel, is described in the Ottawa Fringe Festival show program as being unclassifiable, collaborative, experimental, comedy, and performance art. It is a mostly improv-based show interwoven with moments of storytelling that “speaks to the backgrounds of [creator-performers] Monica Joan Ogden, as a Filipina settler woman, and Tony Adams, as a European settler and ally”(show brief 2017). While I respect the desire to create art that is deeply politically motivated, I find the tone in this show and its overall framing leaves something to be desired. 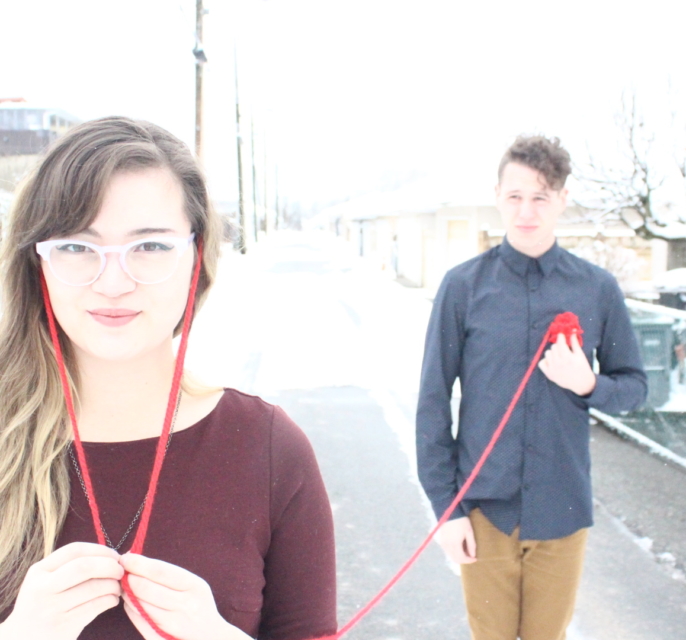 It will be difficult to give a plot synopsis of the show, given that large portions of it will be different each performance. However, from what I’ve heard: the show always starts off with performers Ogden and Adams trying to make themselves, or someone in the audience, sneeze – until then, the assumption is, the show will not continue. In between moments of improvised sketches and audience participation, we hear about Ogden’s decision to reclaim her Filipina heritage as a woman of colour; her struggle with endometriosis; and Adams’ struggle with not being able to sing despite really wanting to. Lub Dub preaches a lot about social awareness, but the result often feels contrived and patronizing.

There is one moment that stands out in my mind as genuinely and artistically speaking to a political metaphor or idea, and that is the bit where Ogden comes on stage wearing white tennis shoes and spends the next few minutes trying to squeeze one foot into the very same shoe only black. This is such a clever metaphor for cultural appropriation and is presented in a comical and endearing way that it doesn’t feel like you’re being beat over the head with the ‘awareness’  stick. I cannot say the same for a good portion of the rest of this show, however.

While Ogden and Adams must certainly mean well, I can’t help but find irony in the fact that a show that self-describes itself as being “anti-oppressive” is in one of the least physically accessible venues in the festival (and this show is a BYOV which means a company has some agency in choosing where to perform; for the record, St. Paul’s Eastern United Church is wheelchair accessible, is a similar space, and not that far away). It spends quite some time recognizing all of the unceded territory within Turtle Island, but makes no attempt to challenge the vast disconnect between #Canada150 celebrations happening all over the country and the current state of many indigenous communities.

Moreover, in response to an audience provided question asking where the performers feel safest Ogden suggests that the reason she feels safe with Adams is, in part, because “he’s a really great ally”; it does come across as a little odd that, in front of his former home audience in a show that “seeks to create honest and genuine moments” (show program 2017), Adams doesn’t take the opportunity to address the arguably culturally insensitive production of pachiv! which he co-created and mounted at the 2015 Ottawa Fringe Festival with his other theatre company Hymns & Hearses; or even his journey towards becoming a “really great ally” and how he promotes good allyship as a white, heterosexual, cis-gendered male in his day to day life.

Finally, theatre artists who are attempting to create a piece of “feminist activism and resistance,” (show brief 2017) should be striving to go further than just parroting rhetoric printed on a t-shirt made viral by‘13 Reasons Why’ star Michele Selene Ang. That’s not to say that it’s not a correct or valid idea, only that it feels a bit lazy to just say “fuck Scarlett and Emma and Tilda and Matt” and neither expand upon that idea (that is: white saviour narratives and whitewashing in Hollywood), nor credit the woman/artist of colour who originally made it famous. This is absolutely the definition of lip service. For a piece that purports promoting nuance, there is an incredible lack of nuance to be found within its own content.

Lub Dub tries to be a whole bunch of things but, unfortunately, doesn’t see a lot of success. It wants to be performance art, but it doesn’t really challenge the audience to think in new and unconventional ways (intersectional feminism is not a new concept even by 2017 standards) or attempt to break traditions of conventional art (it’s basically an improv show with an over-pronounced political message); it wants to be experimental, but the performers’ biggest risk comes out of allowing the audience come on stage to add to the proverbial art work, which is not an uncommon trope by any means (even the sneezing bit, the performers are ultimately relieved by their stage manager if it goes on too long, eliminating any possible stakes in the matter); it certainly has comedic moments, due to the heavy reliance on improv, but then does that cancel out the ‘unclassifiable’ label? This leaves me unsure of what kind of take away I am supposed to have as an audience member (maybe this is where ‘unclassifiable’ comes in) because it focuses far more on convincing the viewer how socially aware  Ogden and Adams are, than actually providing much substance in this work to support those claims.

[Author’s Note: Edits have been made in this review in response to feedback given by performer and WoC Monica Joan Ogden. We acknowledge and sincerely apologize for any harm the problematic word choice/phrasing has caused.]