The season is upon us. What season, you ask? Fringe season, of course. It’s less than 3 weeks ‘til Ottawa Fringe begins, and last week I was in attendance at the 1st annual Tampa International Fringe Festival as a kind of warm up for the long haul of the season. This week for Dark Day Monday, a debrief, and a long range forecast for some acts that will be rolling into Ottawa in June.

Attending the Ottawa Fringe is a bit like following a path through a well oiled Rube-Goldberg machine. You are bounced through a precisely engineered series of obstacles and are treated to a highly entertaining theatrical ride. You know, like when sometimes the beer tent makes a slow 2-year transformation into a condominium building; or the University of Ottawa decides to dig up the entrance to the Theatre building mid-week without telling anyone. But the general system is in place, and people, both artists and audiences, know what to expect, and generally, where to go to get things done. 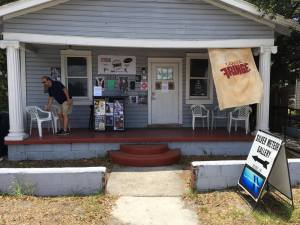 A first-year Fringe is completely different. The audiences are mostly first-timers. The producers are new to the conglomerate nature of this particular game. And the performers have a unique challenge of simultaneously teaching people how to Fringe, directing them to shows in venues they’ve never heard of, and navigating the various obstacles of a city they may never have been to before.

The Tampa Fringe was surprisingly well organized for a first-year festival. I mean, I haven’t attended that many festivals, and none in their first year, but knowing how much work goes into organizing a single theatrical production, or the NOC, I have to say I was impressed.

The festival was spread out across about a 15 minute walk between four venues, ranging from a 70-seat black box, with full tech, through a converted living room theatre, to a media studio, and a bar. It was small, featuring only 29 shows over 4 days in the historic downtown district of Ybor City in Tampa.

But none of that means anything, really. Those are just facts. They don’t give any of the festival’s flavour, like the sun soaked, umber-cobbled streets that turn into sharp 90 degree verticals of the fronts of old cigar factories re-purposed as trendy bars and restaurants. They don’t tell you about the roosters that strut back and forth across the passenger-rail tracks 30 feet from the door of one of the venues. (Watching shows there, I was thankful that passenger-rail service only reaches in downtown Tampa once or twice a day. That said, there was a rather magical moment for the lyrical 2-hander Kara Sevda, set in a train station as nuclear winter closes in, and which will be hitting Toronto Fringe in July).

It doesn’t tell you anything about the Cuban cigar maker who left his indelible mark in the forms of interlocked brick, legacy cigar shops, and spicy Cuban sandwiches when he founded the district in a move that may have saved the city of Tampa from ruin during an economic slump in the 1880s. I learned that from one of the Roller Derby players who came to see Nancy Kenny’s one-woman show, and then led us on an outing to the combination burger joint/drag show that is Hamburger Mary’s (the burgers were above average, the drag show was great).

It also doesn’t tell you anything about the Fringe veterans Will Glenn and Trish Parry (if you’ve ever been to Winnipeg Fringe, you may know them from the show A Brief History of Beer), who served as the festival’s first executive team. Until last week, they’d been professional artists and technicians, even producing a monthly story-telling series in New York, but never festival producers. Nor does it tell you about the technicians and performers who arrived from far flung corners of the globe including New York, Ireland, and Australia.

The Fringe in Tampa was lacking a central hub and beer tent, one of the things that makes Ottawa Fringe so wonderful, but for all that, there was a wonderful sense of community that built up between the local first-time fringe artists, and tour veterans. I met a very queer clown from New York City named Dandy Darkly (or, behind the makeup, Neil) who has reprised classical myths into virulent rapid-fire spoken word. It’s a bit like if you stuffed Jem Rolls into a sparkly silver spandex clown suit with 18” pointy cone shoulder pads. I met Rob Lloyd, the Whovian David Tennent wishes he looked like, and who is bringing his one-man Who, Me. to this year’s Fringe in Ottawa, by providing sound effects for a cabaret bit in which Lloyd narrates the Indiana Jones maze-run of a pair of mice. And that’s to say nothing of the many other lovely humans and performers with whom I had the pleasure of raising a glass and burying a time-capsule.

To no one’s surprise, it’s the people who make Fringe the beautiful messed up place that it is. But it’s not roses. Despite billets with pools, and scoval-rich sandwiches, I’ve been in Florida for 2 weeks now, and I haven’t even seen one ‘gator!

This festival would be a tip-top place to premiere a new work in front of some humans, because it seems like it’s flexible enough to give you whatever kind of space you might need, and if the audiences aren’t scared of a mustachioed obscenity-shouting clown, you won’t scare them away. Canadian Fringers who apply to Orlando ought to keep this one on their radar as a warm-up for the big show, or someplace slightly obscure to test out something new.

Speaking of Orlando Fringe: stay tuned for next week, when I’ll tell you about the madness that is Orlando Fringe. (Spoiler alert: unless things take a sharp turn to the swampy, I still won’t have seen any gators).