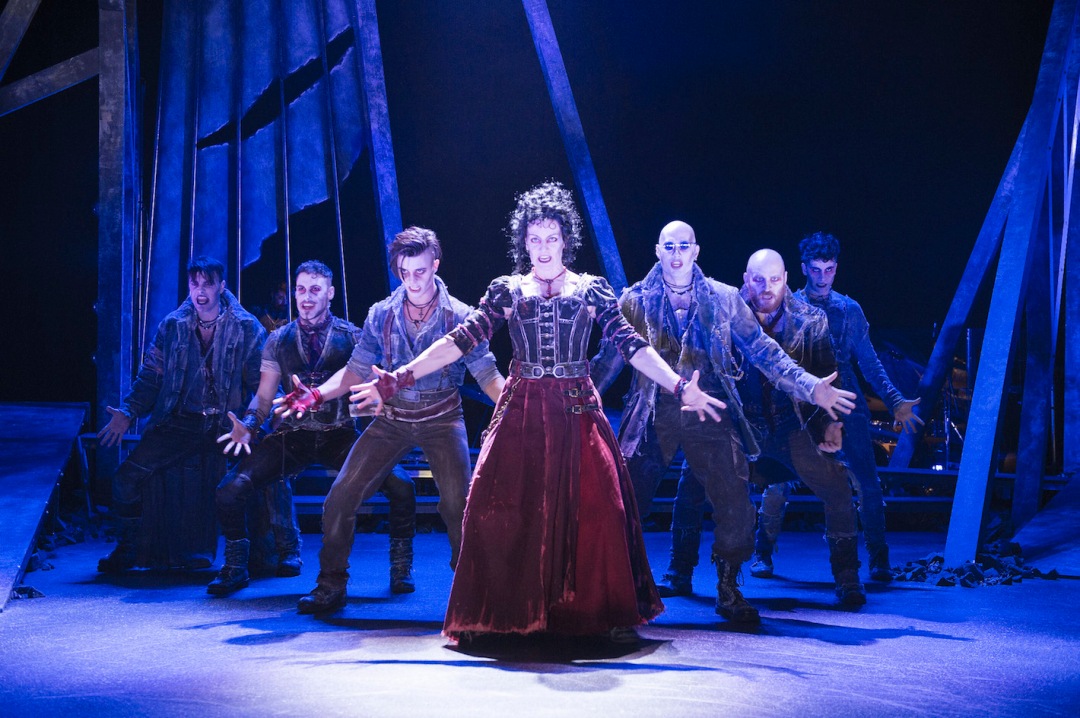 “Within these twenty-four hours we may be taken from France to Russia, from Racine and Moliere to Chekhov; we can even cross the Atlantic as a bolt of inspiration to serve on a Campus in California, enticing a young student there to reinvent and make their name in theatre.

Indeed, theatre has such a thriving life that it defies space and time; its most contemporary pieces are nourished by the achievements of past centuries, and even the most classical repertories become modern and vital each time they are played anew. Theatre is always reborn from its ashes, shedding only its previous conventions in its new-fangled forms: that is how it stays alive.” –World Theatre Day Message 2017 by Isabelle Huppert

March 27th might mark the official World Theatre Day, but you can celebrate all week in Ottawa by checking out these great local events!

In almost timeless tradition, A Company of Fools will host the Ottawa Theatre Challenge where several theatre companies/artists battle it out to see who will dominate this creative competition to take home the coveted Rubber Chicken Award. This event is seemingly legendary for its theatrical shenanigans and this year should be no exception with competitors like Dead Unicorn Ink, Strange Visitations, and Black Sheep Theatre. With having had only 48 hours to create their piece, these artists are ready to throw down tonight at Arts Court, 7:30pm. Be there or be square!

(UnTold): In Too Deep Edition

“The original storytelling series with three rules: it’s got to be true, it’s got to be about you, and it’s told in five minutes”. Presented by the Ottawa StoryTellers, this event is sure to be a fun time with a variety of participants entertaining audiences with real life tales about times in their lives when they found themselves “in too deep”- whether it pays off or blows up spectacularly in their faces, well, you’re just going to have to go find out for yourself. Playing at the Byward Market Heart & Crown (Black Rose Room) at 7pm, this event is free and volunteer run by the Ottawa StoryTellers.

Moving into its second and final week is Daniel MacIvor’s Marion Bridge, directed by Chantale Plante, at the Ottawa Little Theatre(OLT). 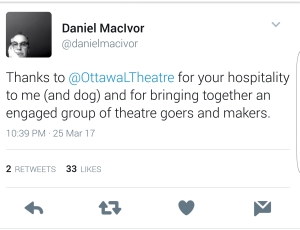 A play about three sisters coming to terms with the inevitable passing of their elderly mother, the women also reflect on the individual choices they made and how those choices played out in their lives. At its core, Marion Bridge is a piece that explores pain and loneliness but nevertheless retains a sense of humour about it all. MacIvor himself was there on Friday evening to take part in a talk-back after the performance and tweeted this about his experience:

Playing until April 2nd; ticket info and performance times can be found here.

Another Canadian classic going up this week is Norm Foster’s The Melville Boys. This comedy explores sibling rivalry and resentment while also highlighting themes of love, loyalty, and compassion. Directed by Steve Truelove and playing at the Ron Maslin Playhouse until April 8th, The Melville Boys opens its doors to the public tomorrow night at 8pm. Kanata Theatre proves that you don’t need to be downtown to get your theatre on!

Plan B by Michael Healey

It’s almost weird to see Michael Healey being staged somewhere other than the GCTC, but on March 31st the Gladstone Theatre will see the Pheonix Players present Healey’s Plan B. Directed by André Dimitrijevic, this play has a most intriguing description: “Negotiations did not go as planned last night? Afraid you made a mistake in your intergovermental relations and there may now be unexpected developments? Don’t worry you can always try ‘Plan B’ the next day for some relief”. Here for a limited time only(until April 2nd to be exact), if you like theatre about politics, this piece is sure to have some timely resonance.

Perhaps the production I’ve been most excited for this month (maybe even this entire year) is Catalyst Theatre’s Vigilante, opening at the NAC on March 31st (previews running March 29th & 30th). A “stomping, swaggering” rock-opera about Ontario’s infamous “Black Donnellys”, Vigilante is already a must-see in my books. Written, composed, and directed by Jonathan Christenson, you can feel the dark, yet electric, tone of the piece just by looking at the pictures of the cast.

What could be a better way to keep celebrating World Theatre Day throughout the week than with a high energy performance that looks like a mashup of Hamlet and Westworld?- in my mind:nothing. If there’s only one theatre event you’ve been saving up for, I would certainly put my money on this one.

Playing at the NAC Studio March 29th to April 1st, Dehors is a text that has had quite an interesting journey. Written by Gilles Poulin-Denis during his artistic residency under the mentorship of Wajdi Mouawad (Incendies/Scorched), the piece has had several public readings including one at Zone Théâtrales in 2015. Yes, it is en français but that really shouldn’t deter any potential anglophone/monolingual audience members. In my experience (given the handful of productions I’ve seen in French)I find that the French tradition is much more physical than most English acting styles so there is actually a lot you can take away from just the body language of the actors and also the design of the piece (lights, sounds, and costumes are all great indicators of mood, narrative, and character if you stop relying on purely the text for information). If you’re looking to get out of your comfort zone this week, give Dehors a shot- it’s only an hour and fifteen minutes, what have you got to lose?

Magic Monday…on a Thursday?! At Live on Elgin

On the other hand, maybe you’re looking to celebrate theatre this week in a more intimate setting. Live on Elgin is the hottest new performance venue in the downtown core and not only do they feature a number of live music shows and improv nights, but there’s also regular magic shows. Now, Magic Monday’s aren’t magic shows for kids, mind you (it is taking place in a bar after all), and the evening also features clown and other comedy acts. While it normally takes place on Mondays (as per the name suggests), this week Magic Monday will happen on Thursday March 30th. Bring a friend or bring a date (heck, go alone…who cares!), show starts at 7pm. Prepare to be amazed!

Celebrating World Theatre Day doesn’t have to be about watching theatre performance, it can also be about participating. Have you ever thought about jumping into the world of improv? Well, now’s your chance to take that leap of faith! Outtake Improv, one of Ottawa’s newest improv troupes, is looking to expand its roster- no experience necessary! Auditions will take place at Live on Elgin at 2:00pm & 3:00pm. More details can be found at their official website here .

Marriage: an Absolutely Impossible Event in Two Acts by Nikolai Gogol at the University of Ottawa

Finally, the last (but certainly not least) theatre event on my radar this week is a new English adaptation of Russian dramatist Nikolai Gogol’s Marriage: an Absolutely Impossible Event in Two Acts. The last exercise in directing for Master’s of Fine Arts(MFA) candidate Nick Leno, this highly ambitious production is definitely not worth missing. Translated from its original Russian by Leno with the guidance of UofO professor Dr. Yana Meerzon, this production will offer up a rare opportunity to see how a director interprets a playwright’s words and message on a deeply textual level. Playing March 28th to April 1st, tickets can be found on Eventbrite.

Though, technically speaking, World Theatre Day might only be 24 hours long, we are reminded by Ms. Huppert in her above message that these mere 24 hours can’t begin to contain the liveness that is the theatrical event- a liveness that constantly transcends geographical space and time. My colleague Wes Babcock wrote something to this effect last #DarkDayMonday where he suggests that there isn’t really ever an end to the theatrical event, as it were, that it is a continuing practice. And so, if we subscribe to these notions set forth by Huppert and Babcock we can begin to celebrate World Theatre Day as a recognition of this ever-present creative force in our lives that, from the beginning of recorded history, has driven us to both seek out and create live theatre performance within our communities. With this in mind then, give yourself the entire week to really dedicate yourself to the local theatre ecology- check out community and student productions; see a performance in a different language or acting style you’re not familiar with; make a point to check out that theatre house you’ve never stepped foot in before; stick around after a performance and try and chat with one of the artists; sign yourself up for an acting and/or improv class…anything! As you can see, my list is by no means fully comprehensive but there’s more than enough to satisfy anyone’s cultural appetite. Whatever it is you choose to do this week, we hope you choose to celebrate this time by engaging with your community in some creative and artistic ways.

Happy World Theatre Day from all of us here at the New Ottawa Critics!