The End? of Art

This Dark Day Monday I’d like to lean back into a more theoretical query: what is the end of theatre? I’m being deliberately vague (not to mention pretentious) about this question, because it lets me explore a few boring assumptions about theatre in an interesting way. This question has two distinct meanings that I’d like to unpack. Obviously, both questions could be answered, “The answer to that is incredibly personal, and will be different for everyone.” But that’s boring too.

First: “What is the point?”

I’m not sure this is the most interesting facet of this question, because it truly is up to the artist and the viewer to determine what the point is for themselves as they engage with (theatre) art. The point, as far as I can tell as both a writer and an observer, is to tell compelling stories through an integration of artistic disciplines that compound and reflect one another as they work toward a shared vision for a piece. What exactly the piece does will clearly be different depending on who is involved in the project, but the point is (nearly) always to engage your audience as much as possible. So if we can accept that working definition, we can move on to the more interesting aspect of this question (or at least the aspect that’s interesting me more today).

A play is never perfect. It aspires toward an idea of perfect, but as a human endeavour cannot actually get there, except maybe in very fleeting moments when everything aligns. And because those moments are fleeting, they are gone almost as soon as they arrive; the play is not perfect. 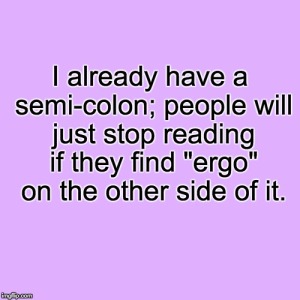 So, if we aspire toward perfection, and can’t achieve it, the simple answer is that we can’t be done. And yet, there are thousands and thousands of plays that are “done.”

Each level of a production, from the script through the design to the acting, aims separately at perfection. So if the author of the script has put it away and will never work on it again, or if they’re long dead, we might say that the script is “done,” but never that it’s perfect. Even more, we find something like Shakespeare, whose words are adapted and reordered and reinterpreted more than nearly anyone else, and we are forced to wonder if the script is truly done when it is reinterpreted through both performance and new writing.

This level of the production is where the critic overlaps with the dramaturge, to help prepare a piece to tell the story that is bound up inside of it in the best way possible. If the dramaturge is meant to unearth the heart of the story through collaboration with the other creators, the critic stands perhaps slightly removed from this clear collaborative role, but retains the constructive exploratory impulse. The critic’s job is always to notice what is present in a given instance of a performance, and explore what that means to them. The dramaturge might go a step further, and participate in making the suggestions and decisions that lead the piece in a new direction.

Throughout the creative process, the critic occupies this position of a close observer, so it is possible to offer criticism of all aspects of the process. This is part of what makes embedded criticism so interesting; it provides a wealth of new subject matter to explore critically (What does it mean for the development of a piece’s choreography to be collectively devised, rather than planned by a single choreographer? How does the organizational structure of the company that produces a given piece affect the product? etc).

When it comes to producing the traditional creative output of a critic, the performance review, the critic steps further back from the creators, and adopts the perspective of someone in the audience. This slightly different perspective brings the critic into more obvious collaboration with the audience, as they work together to engage with and interpret the performance. One of the things I’m most excited for in our upcoming residency at the GCTC is to contrast the performance viewing experiences of the critic embedded in the rehearsal process with the critic whose first contact with the piece comes in performance.

At this point, under some theories of how art works in the marketplace, the production team has made their best effort to ensure the audience is getting a “final product” when they come to see the show. Rehearsal is over, and now it is time to “perform.” It is not a “perfect” version of the show, but it is “done.”

At least, that’s the common understanding of how things work. The director generally stops giving notes during the run, and the designers aren’t generally contracted to change any part of their input during the run, and the actors are “supposed to” go out on stage and do the same thing every night. Avoiding a treatise on the theory of acting, I will just say that it is literally impossible for a human to do the same thing twice in precisely the same way, no matter how practiced they are, no matter how simple the task. No two performances will ever be exactly alike, and so there is always room for constructive criticism, and taking it into account.

So the run begins, the performance review gets written, the run ends, and then what? Of course, the answer depends on the show, but it’s probably safe (or at least, optimistic) to assume that even if the artist will never go on to do that particular show again, they will continue their artistic practice. This fact makes me wonder if the performance truly was the “end.” Because the nature of artistic practice is that you are exploring the world and figuring things out continually, and the moment you think that you’ve got it, you don’t. Hence “artistic practice;” because it can never be done. You put on the show to teach you more things about your practice, and you practice to put on the show.

This suggests that the “performance review” serves a similar purpose for the artist as the products of an embedded critic. Both are potential fuel for inspiration and reflection on the work that the artist has done. This holds true for the critic as well; embedded criticism and a performance review are both an opportunity to hone their observational and writing skills. The difference seems to be in our societal understanding of the point of art, not in the actual purpose of the review, or the job of the critic.

From a practical standpoint, there is always a time when making changes to a piece is not worth it. That time comes when the cost exceed the benefits of continuing work. From an ideological standpoint, however, I’m not sure there is. If the goal of a piece is always to make it the best possible, and there is always room for improvement, then there is no end. The decision to move on to new work comes from the ideals of the artist, not the piece. Because it must be the artist’s goal to make themselves into the best artist possible, and that “end” is not always served by exploring the same piece over and over again. Completely redesigning the set of Betroffenheit, for example, to serve a slight shift in the manifestation of the artistic vision of the piece would cost far more time, effort and money than the change is likely to be worth to the piece. Both practically, and ideologically, it’s better for the artists to move on to create a new work taking into account the lessons they learned in the creation of the present one.

As a critic, it’s my responsibility to participate in that process through documenting the results to date, and pointing out gaps where more discoveries might be made. As an artist, it’s my responsibility to explore those gaps, and discover new gaps that we didn’t know about before. The overlap between those two activities is significant. Of course, it is ultimately the responsibility of the individual (in either camp) to evaluate for themselves the “end” of their work, and the value they perceive for themselves and their practice in the feedback provided by the work of others. Critical documentation is a fleeting record of fleeting moments and processes, which are fleeting records of the mental space of the artist and the society in which they operate, which changes the mental and social space moving into the future.

So the art doesn’t “end” in any strict sense, no matter what we do. Does that make it futile? I don’t think so. I think it gives us limitless room for exploration and discovery and excitement. Let’s get to it.