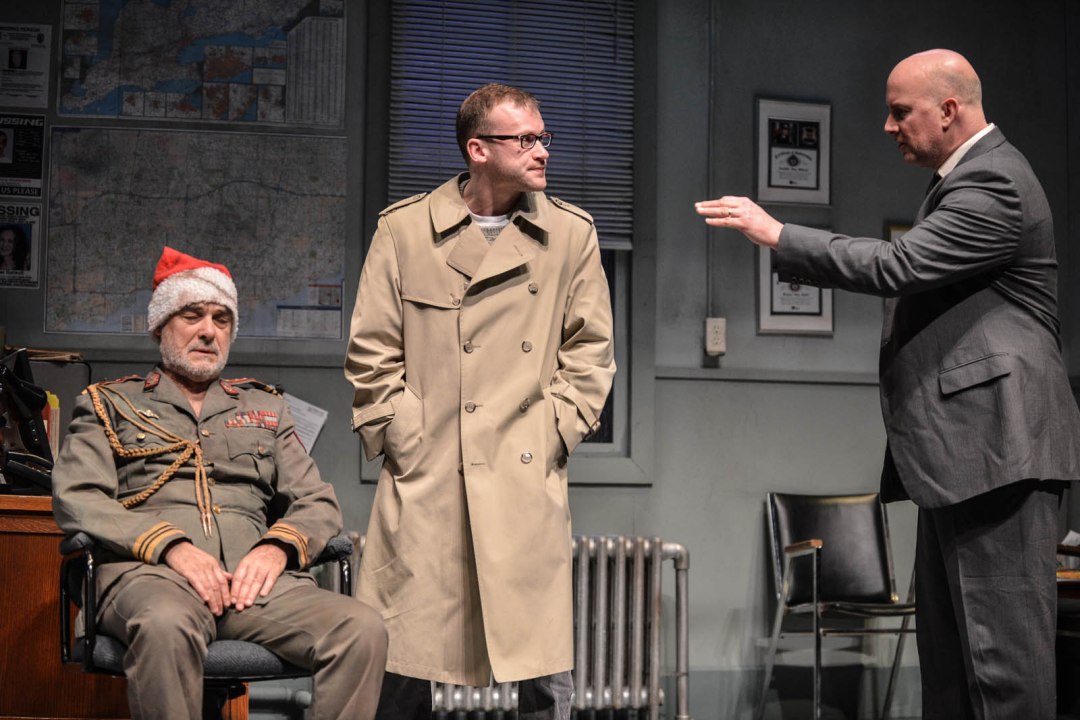 Every so often one hears whispers about the seemingly apparent lack of work coming out of the GCTC that excites or speaks to a younger generation of theatre goers. Stuck between the proverbial rock and a hard place, where pleasing a large subscription base often overpowers the desire (or the ability) to produce more provocative work that might draw in new audiences, Artistic Director Eric Coates has struck the perfect balance with Nicolas Billon’s Butcher, playing until March 20th. A dark and gruesome tale from a playwright who was awarded  the 2013 Governor General’s Award for Drama, the gripping narrative combined with an adept use of allegory creates a truly remarkable piece of theatre that is not to be missed.

Without giving away too many spoilers, Butcher is a piece that explores a number of concepts revolving around the idea of justice; most notably how the desire for fairness and the feeling of hatred can act as major players in how an individual seeks their due process. When an unidentified man shows up at a police station Christmas Eve wearing only a red Santa hat and a strange military regiment (that is later revealed to be highly significant)  we are immediately thrust into an intense investigation about who this man is. Where did he come from?  And how did he end up with a butcher’s hook around his neck? While we are so busy internally interrogating the mysterious nature of this man’s identity, we forget for a few moments that there are perhaps other characters we should be just as curious about too. Billon unravels his story at a marvelous pace, expertly maneuvering the many twists and turns used to keep its audience constantly on their toes.

GCTC’s Butcher for the very most part is strong and sharp; Coates, as the director, gives us a fast-paced and hard-hitting production that is incredibly well acted. The overall stage design (by Roger Schultz) serves its purpose in underscoring the ultimate reveal. The transitions don’t always work for me only because it feels a little out of place having these stylized slow motion shifts combined with the rapid hyper-realism in the written scenes; though, they are somewhat effective in softening the piece’s more violent blows.

That being said, the casting and the quality of performance in this show are excellent. The cosmos have really aligned for Coates in this instance where casting John Koensgen and son, Jonathan, becomes a great advantage in a piece that deals heavily with the relationship between child and birth parent. Koensgen Sr. as a battered Josef Dzibrilovo delivers a chilling embodiment of stoic resolution and an individual’s absolute determination to maintain “some shred of dignity” at all costs. It should also be noted that Koensgen only speaks in Lavinian for the entirety of the show, a language created by linguists Dr. Christina Kramer and Dragana Obradovic specifically for Billon’s play. Hamilton Barnes, played by Koensgen Jr., is a strong representation of the struggle between reason and emotion- between the heart and the mind. The chemistry between the two characters (given the actors’ relationship), as you might imagine, is very real and genuine onstage and works well with this particular piece of theatre.

Samantha Madely as translator/nurse Elena is certainly a driving force in this show, however, there are moments where her voice loses its (and forgive the vagueness of the term here) grain of truth– or sincerity- and becomes very actor-y, as if she is presenting dialogue to the audience rather than feeling or embodying it. In these few moments, the character’s words lose some of their innate power and risk becoming a bit didactic. On the other hand, perhaps it is not the intention to be able to relate to (or even understand) the figure of Elena as one can interpret her as existing only to serve as an allegory to the Greek female deities of vengeance: the Furies.

The real stand-out, in my opinion, is Sean Devine as Detective Lamb, who gives such an outstanding performance that it will most definitely leave you reeling. The way in which his character is set up at the beginning of the play- using humour, good nature, and more than a little buffoonery to lure the audience into a false sense of security- is deftly done by Devine under Coates’ direction and never once (until it’s too late) do you realize that there is but one character who never comes under scrutiny. The switch in the character’s personality at the culmination of the play is so swift that it takes only a moment to fully realize the depth and the sinister nature of what just took place on stage.

I wish I could dedicate a little more time to explore the full extent of the socio-political commentary that can be gleaned from Butcher. However, 48 hours is not nearly enough to elucidate fully and thoughtfully on making links between Billon’s fictional Lavinia and the very real events that took place in Nazi Germany, Rwanda, and Armenia (to name just a select few). How we, either individually or collectively, decide to acknowledge or ignore atrocities such as these is just one thread in this complex tapestry presented to us in this production. The use of images and figures drawn from Classical Greek literature is an effective way of juxtaposing the concepts of reason (exemplified by the practice of law vis a vis the character of Hamilton) and that of vengeance as being two sides of the same coin-namely justice.

The reasoning behind my feeling that this piece speaks to a younger generation of theatre goers isn’t due to its R rating or because it is more ‘gory’ than perhaps what is traditionally staged at the Irving Greenberg Theatre Centre, but rather because it is a dramatic work where the story finally pertains directly to the world that us millennials, as it were, are currently growing up in and being formed (and informed) by. Butcher, more than any other piece I’ve seen recently produced by the GCTC, encourages us to take a deeper look at how desensitized we’ve become to worldly tragedies until we find ourselves directly implicated in one. I sincerely hope that the GCTC continues to produce work of this calibre and if the week long extension of this piece is any indication- the future looks hopeful in this regard.

Edit: an earlier version of this review mistakenly cited “Butcher” as having won the 2013 Governor General’s Award for Drama.  This award was presented to Billon’s play “Fault Lines”.