Every now and then, I see a show that completely baffles me. I don’t mean this in the sense that it’s mind-blowingly good or bad, just that the creators of the show seem to be on a different wavelength. 100 Watt Productions’ Particle is exactly that kind of show, although I suspect the “different wavelength” thing may be intentional. 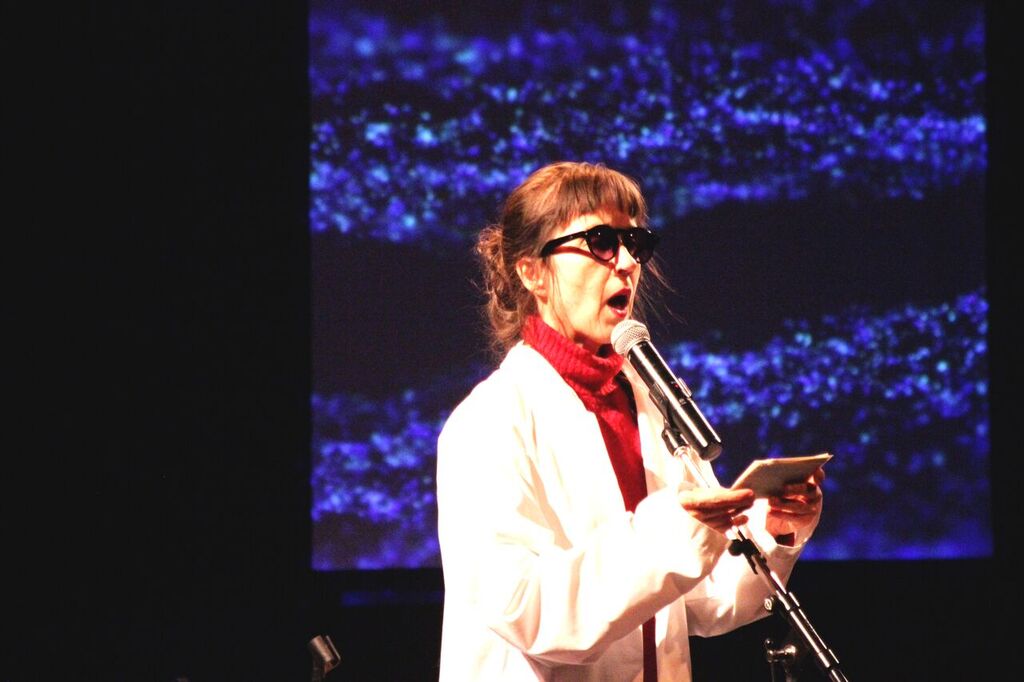 I don’t say this because the script focuses mostly on Virginia Woolf’s 1931 novel The Waves as well as basic particle physics, because to write a review around a pun I made would be self-indulgent at best. I say this because beneath the basic structure of Particle, with its broken-up scenes analysing an 85-year old experimental novel; its brief but presumably necessary foray into wave theory; many false starts to scenes; and Kristina Watt’s stubborn refusal to face the audience unless playing an overly artificial character; we are being prepared for something. A moment, perhaps. As Watt says in the character of a sort-of beatnik scientist, “Some particles last only a trillionth of a trillionth of a second.” Everything that comes before is set-up for its existence, not unlike the work of theatre practitioners and the creation of a play.

It’s probably safe to assume the majority of spectators have not read The Waves, but this doesn’t matter so much as during the build-up to whatever is going to happen Watt catches us up on the action of the novel, in which 6 friends interact with each other over the course of several decades. Despite the majority of performance time being devoted to what is essentially onstage Coles Notes, it remains interesting and intense in its theatricality – the literary analysis is broken down into small scenes broken up by nonsensical intervals in which Watt walks with her back to the audience, places a garbage can on her head, and the like. In the scenes themselves we are treated to such characters as a CBC radio presenter doing “Journey Through the Classics” (this sketch features a puzzling reference to “Homer’s Ulysses”), a Scottish guy who knows about loneliness, and more than one appearance of Groucho Marx glasses.

The more this fractured sequence of thematically-connected scenes goes on, the more obvious it becomes that this is all some kind of front. Why can’t she tell us why this book is important? Why can’t she be herself while she’s doing it? Why does she need the intervention of the AV guy to do such simple things as move a microphone or change the music? She’s building herself up to something, but it’s not yet clear what it is. Whatever it is, it must be something the book helped her realize. And because she can’t tell us herself, she must give us the book so that we can realize it without telling her.

The problem is I’m not sure, even after having seen the show, what that thing is. What gets through the most for me is not the summary of the novel but rather the explanation of how particles move in waves – although a wave moves along, the particles that make it up do not move along with it. The disturbance between the particles is what we pay attention to instead of the particles themselves. This, I think, is the key; but it’s still too vague for me to really put my finger on it.

Kristina Watt is thoroughly enjoyable for her characters (who doesn’t love a Scottish accent?), and the hovering uncertainty that hangs about her like a cloud when she finally faces the audience without a disguise is simultaneously endearing and infuriating. There are perhaps a few too many set pieces, making the performance space look busy, but to director Martha Ross’ credit every single one is used. The only set piece that seems completely unnecessary is a projection screen, which is only used for projecting the THE WAVES as well as footage of light moving through water. This footage is used for a rather lovely image of Watt pretending to be rocked away by waves (especially when you consider the manner of Virginia Woolf’s suicide), but conventional stage lighting offers possibilities to achieve a similar effect. Additionally the projections are not cropped to fit the screen, and so quite a bit of the upstage wall is illuminated, making the lighting design look uneven.

Particle offers up a fundamental paradox – that we often resort to illusion in order to reveal the truth – but like a paradox, it just can’t be solved. It’s worth a good crack at it, though.