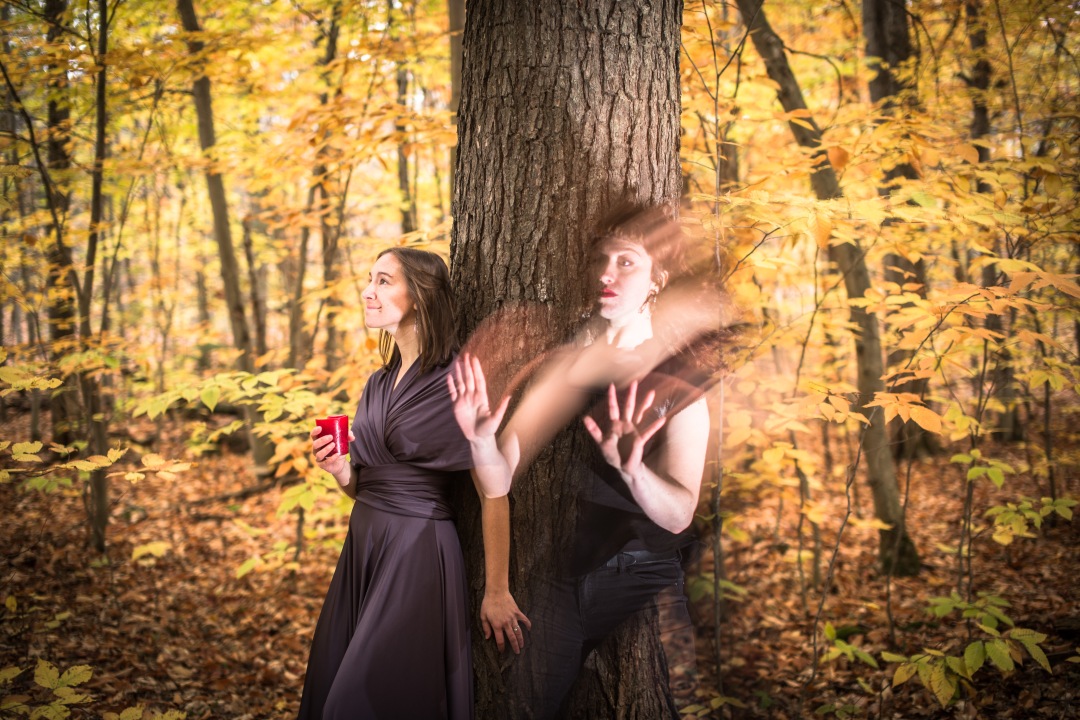 TACTICS (Theatre Artists Co-operative The Independent Collective Series) opened up its second season with an interesting double bill, no doubt meant to spark discussion. (off) Balance and feelers gives audiences a chance to indulge in an evening of performance that features a fusion of dance and storytelling. Playing until November 21st at Arts Court Theatre, these two female driven pieces both address some of today’s hot topics though one does this more effectively than the other.

The night begins with (off) Balance written and performed by Naomi Tessler with direction and dramaturgy by Artistic Director and Series Curator, Bronwyn Steinberg. The piece is mostly biographical in nature and Tessler describes it as unravelling the “mud and magic” (show program) of her first year at the University of British Columbia. The narrative follows Tessler’s journey, her subsequent descent into depression and possible bipolar disorder, and her road to recovery. It focuses on dealing with mental illness, trying to find your spiritual path, and the courageous conversations we all must have as a result of these struggles.

To be honest, there are a lot of elements in this production that I find extremely confusing. The first is the overall framing device revealed at the top of the show where Tessler tells her audience that the stories of her grandparents, who committed suicide, are also woven into the story- her story- that she is about to tell us. Unfortunately, we don’t hear about her grandparents again until they are mentioned much later in the piece in a rather off-the-cuff remark, made by the character of Tessler’s father, when a doctor makes an inquiry about there being a history of suicide in the family. This is only the beginning of this play’s problems though.

Mostly, it seems that this play doesn’t know what it wants to say. It uses an unnecessary number of theatrical elements (live sound, pre-recorded sound, finger painting, audience participation, dance/movement etc) to somehow express the importance of this story, but it doesn’t appear to possess a significant through line- or a moral (what is this plays essence? It’s why?). (off) Balance in its first half appears to be a show about mental illness and seeking help (though mildly mocking the professionals in this industry and the arguably outdated and shallow methods used to diagnose these illnesses), but the second half brings in this concept of clairvoyance and getting in touch with one’s spirituality that complicates and confuses the overall message of the play.

To be frank, it is incredibly difficult to pull any sort of message out of the text itself when it is predominately made up of one sided conversations with invisible characters on stage. The only apt way I can describe this experience is by picturing someone on the telephone where you can’t hear the other half of the conversation. It also doesn’t help that many of the images that are found in this performance are hardly ever explained or motivated.

For example, the red fabric circle that Tessler plays in for the majority of the piece seems like an unnecessary limitation of space when group circle therapy is brought up towards the end of the play for a mere five or six lines. Similarly, the singing bowl, an instrument widely used as an aid to mediation and no doubt in many Reiki practices, is picked up once and used only briefly before being quickly passed off to live musician Lucila Al Mar, sitting just slightly offstage, never to be seen again. Finally, the white scarf/’blanket’ is unclear in its meaning as it is used as both a symbol (of the past depression in her family) but also as a way to denote different characters. It is difficult to discern whether the spectator should be associating these characters (i.e. her mother, counselors, psychiatrist, etc) with that history. I am then even more baffled by how this all fits in with the parts about mediating spirits.

While I certainly appreciate Tessler’s courage to put such vulnerability and honesty on stage, this particular performance doesn’t register for me as being incredibly fresh or exciting. In its current iteration it feels a little basic, and it doesn’t say anything new or compelling about mental illness or alternative healing practices. (off) Balance, unfortunately, left me wanting so much more.

Feelers, on the other hand, is a breath of fresh air. I have seen this piece in one of its earlier inceptions as part of a dance expose presented by Dark Horse Dance Projects. Choreographed by Amelia Griffin, it was one of my favourite pieces of that evening and, despite being almost completely different this time around (no doubt thanks to some dramaturgical assistance provided, once again, by Steinberg), continues to be so. A dance piece that addresses the level of street harassment women face every day, the performance is both thought provoking and provocative.

Though the piece is much shorter than its predecessor, it features a number of scenes that comment on the different ways women have to take their own personal safety into account in their day to day routine.  It starts off with a discussion about space: public space, personal space, and intimate space and how there is a flagrant and open disregard for women’s personal and intimate space. It examines how much women consider their outfits before leaving the house (“Do I look slutty?” “Will people say I’m asking for it?”) while recounting local stories of sexual harassment to the audience.

The choreography is powerful and explosive and my favourite parts are certainly the duet with the two female dancers, where the one performer (after having clearly depicted a violent assault on stage) sits on top of the other (in a defeated fetal position) and comments on having wanting to “experience it from the other side”; and one of the final scenes where the female and male dancer pair up in an incredible sequence driven by pre-recorded voice overs that highlight how patriarchy is destructive to all genders.

There are a couple moments that feel more drawn out and awkward than others. Such as the very long “costume changing scene” when the performers are commenting on one another’s fashion choices, trying to come across as natural, but feels a tad disingenuous and forced. Furthermore, the decision to have audience members come on stage and act as other patrons during a scene that takes place in a club seems superfluous and a little needless- are these figures really necessary in creating the image and atmosphere of a nightclub on stage?

However, the pros definitely outweigh the cons in the case of feelers. The self defense guide is as chilling as it is incredibly helpful. Barking like a rabid dog to scare off assailants? My immediate thought was: wow, that’s a handy tip. Maybe that sounds dramatic to some, but when sexual assault is a regular occurrence for women in many (if not all) parts of the world making yourself look like a wild and vicious animal in order to defend yourself doesn’t seem like a bad idea after all.

Overall, this is a show that makes strong and confident statements about real world issues. It expresses a story clearly by incorporating both text and dance into the piece that makes us question how we traditionally view situations of sexual assault. It is refreshing to see dance being included in the TACTICS season and if shows like feelers are any indication, I hope we see this trend continue.