It’s always exciting when an artist puts on a double bill of their work as it gives an audience the rare opportunity to compare two pieces side by side in one sitting encouraging post-show discussions to veer towards finding commonalities and contrasts, while at the same time considering the conventions, the aesthetics, and the overall development of the artist from piece to piece. Anita Majumdar’s doubleheader Fish Eyes and Boys with Cars, produced by Nightswimming Theatre at the Irving Greenberg Centre home of the Great Canadian Theatre Company, is no exception. A decidedly smart programming choice made by Artistic Director Eric Coates, we are able to see Majumdar’s work on a spectrum as it were with Fish Eyes representing the artist’s work as fully developed and Boys with Cars as a work in development.

The stories revolve around the coming of age of two young Indo-Canadian women, Meena and Naz, growing up in Port Moody, B.C. Battling a high school “microcosm of patriarchy that’s still very much relevant to Canadian communities” (“Playwright’s Message”), their struggles with female oppression are dealt with through each character’s approach to traditional Indian dance. The other important aspect to note is that while these stories are not necessarily autobiographical, they are rather representative of what “Canadian” looks like to Majumdar herself (Ibid). Through portraying these interpolating identities, the playwright manages to layer narratives from classical Indian dance, Bollywood, and even Dirty Dancing and creates something truly captivating on stage.

Fish Eyes starts with Meena, a seventeen year old girl of Punjabi descent who is obsessed with Bollywood megastar Aishwarya Rai and high school hunk Buddy Kane. Determined to snag the heart of Buddy, young Meena immerses. herself in girlish fantasies and begins to lose sight of what is important: self-pride. In a parallel but asynchronous aside, Kalyani ‘auntie’, Meena’s dance teacher, loses her heart to a British officer, who spurns her. The chronology is problematic, of course, given that the British left India in 1947, which would make Kalyani ‘auntie’ an octogenarian for this romance to have happened. However, this anecdote brings out the piece’s subtext of desire problematizing acquired hierarchies and categories, whether colonial or in the context of a Canadian high school.

Unfolding within the same universe, Boys with Cars introduces us to Naz, an adolescent Ismaili Muslim Kathak dancer who often gets hired to perform at local weddings. When Naz suddenly finds herself as ‘one of the cool kids’ through the attentions of the new kid, Lucky, she becomes part of a world completely foreign to her and ultimately pays the price for trying to rise above her station. A significantly darker piece than the first, Boys with Cars deals with the complexities of navigating high school cliques while also commenting on the agency society places on female victims of sexual harassment and rape.

An essential component to these pieces is the integration of the dance throughout. It is expertly woven through Fish Eyes with Majumdar using Indian mudras (or hand gestures) to denote certain characters and character transitions: the mudra known as the bhramara (or the Bee) is fittingly reserved for high school queen bee Candice and the Shikhara mudra, known as the Peak of the Mountain, is used mostly when Buddy Kane takes the stage. The stomping of feet used to signify character and beat changes modulates the narrative rhythm and often creates tension in high stakes situations, such as anytime Meena confronts her “Aunt”. Fish Eyes is a good example of a show that uses dance as both pure theatrical convention and as character development which we see in such numbers like the “lemon-lime lover dance”, the bhangra, and most tellingly in the fusion of Bharat Natyam and Bollywood dance with Destiny Child’s ‘Survivor’ in which we see Meena existing between two cultural spaces: the Bollywood space of her basement rehearsals with Kalyani ‘auntie’, and also the sphere of pop culture and public life that she inhabits at school and the outside world. Dance as a vocabulary becomes something she uses to negotiate those realities.

Unfortunately, the same cannot be said for its “sequel.” Understandably this is because Boys with Cars has not seen nearly as much development or performance time, but nonetheless it seems to be missing something– whether that’s adding another texture or incorporating a more solid through line. With so many issues being dealt with in the piece- sexism, sexual assault, bullying etc- it is hard to say what brings the piece all together. Where its predecessor has a neat cyclical structure to it, in that the play starts with the telling of a story through movement that then gets verbally narrated back to the audience at the end, Boys with Cars doesn’t have this same feeling of completeness.

It is an excellent story with strong writing no doubt; it is the staging and the performance itself that need more time to be lived in. If Fish Eyes is any indication of Majumdar’s ability then I can only expect that in due time Boys with Cars will come into its own on stage and really deliver the emotional punch that its text demands. Heck, it’s nearly there.

The overall design of these two pieces is certainly worth mentioning as well. Set and props designer Jackie Chau and lighting designer Rebecca Picherack are responsible for the exuberant mix of sumptuous colours; various shapes, lines, and stage blocks; and hanging white curtains that we see on stage. By cutting and shaping the space to be slightly smaller and more intimate they eliminate the risk of the solo performer getting lost in the seemingly cavernous playing space at the Irving Greenberg Centre. Moreover the stage itself is versatile, easily transforming into different locales or states of mind necessary for the two pieces. By using certain colours in lighting and by illuminating the different shapes and lines on stage and different times, we traverse from high school parking lot, to gym class, to fantasy worlds without any awkward set changeovers that, more often than not, take you out of a piece completely. 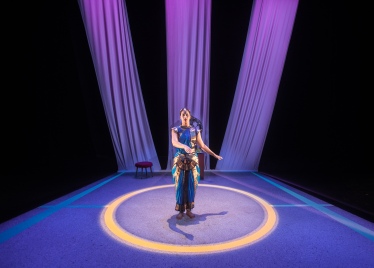 Brian Quirt’s direction, perhaps more appropriate to talk about with regard to Boys with Cars (Fish Eyes was originally directed and dramaturged by Gregory Prest), is sufficient if not perhaps a little tentative. Where Fish Eyes incorporates dance heavily throughout the piece allowing the performer to move freely about the stage, Majumdar is much more grounded in text and monologue in the second piece. As such, much of the movement feels unmotivated or only motivated by the need to move the performer from one spot to another, such as when Majumdar transitions from introducing the high school gym teacher to the principal by simply crossing from stage left to stage right for no real reason other than that in itself.

Further, Naz often addresses the audience directly when delivering text with any kind of emotional impact, yet it is difficult to invest emotionally in this character because her stakes are not always clear. Why is it significant that Naz becomes one of the cool kids? Following her assault Naz loses her family, her school, and her “friends”, but what does she lose within herself and does she get it back? Finally, how does the story of Naz’s dance “manager” pertain to Naz’s situation? This isn’t to say necessarily that these answers themselves aren’t in the text, only that in its current staging these aspects (or stakes or motivations) are not as clear as they might be.

To conclude, despite all of this ‘nit-picking’ this is truly a special piece of theatre as it is accessible on so many different levels. As Majumdar states in her “Playwright’s Message”, these aren’t pieces solely about cultural “otherness” or even “misunderstood, misrepresented ‘religion.’” Fish Eyes and Boys with Cars are plays about the “coming-of-age struggles” endured by two female protagonists who just so happen to be women of colour. The two shows have something for everyone whether that’s dance, design, or story-telling and it is an incredibly fun show to be a part of. Not only does it showcase Majumdar’s expertise in creating shapes, stories, and characters through the integration of classical Indian choreography, but it is a successful reflection of a universal, yet distinctly Canadian, experience on stage.

Fish Eyes and Boys with Cars