Living with Me + My Monkey: a Bit of a Mess

Bradley Spann grew up sharing space with a pet monkey in South Central LA. Now he is here to tell us about it in a very funny coming-of-age tale populated by amusing characters. 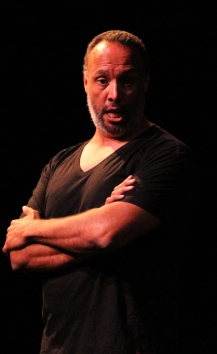 Besides a large water bottle, which I’ll address later, the stage is bare for this show, and Spann does an excellent job occupying and taking command of the space. Spann’s strong physical presence on stage is what I appreciated most about the recounting of his story. He is a self-described “big man,” and uses his size to do a fun take on his own childhood. Moreover, the animal characters in this play are pretty great, and definitely have good comedic bits. They were my favourite of the other characters Spann embodies, though I also liked the very brief appearance of Spann’s tattling little sister.

I like the other characters in the story much less, as I feel they aren’t rendered in a quite real light. Spann’s mother in particular is too much of a caricature for the rest of the show for me to buy the one moment when she expresses something other than “domineering mother.”

A certain sheen of disbelief also occasionally covers the monkey, who is otherwise the show’s highlight. What broke the otherwise very effective characterization for me here was that the monkey with apparently African origins speaks with a Latino-infused accent and speech-pattern that, while amusing, makes very little sense.

Despite Spann’s strong physical performance, I have a number of issues with the script and direction in this production.

The first is the large water bottle that sits up stage. While I understand that story telling and performing theatre is hard work and I have no inherent problem with hydration on stage, I found that in this case there was far too much of a break in the story’s flow. It felt like 5 distinct and unwarranted act changes, in which the lights would change, and we would pause to listen to a musical interlude while we watched Spann drink. Then we would watch Spann focus himself to the correct part of the script and launch (in a commendably skilled recovery) back into the next part of his tale.

Then there was the script, which though very amusing further prevented (along with the drink breaks) a smooth ride through the show. It’s strongest part (and that of Spann’s performance) is at the end, particularly in the wrestling scene. Here, the pacing was just right and it hit the emotional notes it was striving for, but there are a few details that need to be cleaned up for it to carry the audience through the show. Despite the success of the conclusion, I am unsure of the point Spann is striving for in a story of growing up. I don’t know if he hopes we’ll leave to be closer with our families, no matter how alienated we might feel from them, if he’s just suggesting that this might be the best way to address an inherently irreconcilable situation. There also seems to be some cross-contamination of factual information known to Spann the storyteller into the consciousness of Spann the child. I am thinking of the several monkey related facts rhymed off by the young boy who then fails to recognize the type of monkey he is about to purchase. Small things like this might seem insignificant, but I believe the quality of details contribute significantly to the quality of the story.

If you can overlook the somewhat minor problems I experienced with this show, you will be in for a fun and unique play-going experience, though one a bit short on polish and unclear in the direction of its thrust.