Kit & Jane: An Interactive Survival Guide to the Near-Post-Apocalyptic Future

After the very successful Little Orange Man that hit the Ottawa Fringe two years ago, SNAFU Theatre has brought back the energetic Kit as a 14-year-old ninth grader.  She has teamed up with her best friend Jane (aka Lucas) to warn us about the impending apocalypse by hijacking a school assembly.  Starring co-creators Ingrid Hansen and Rod Peter Jr. and directed by co-creator Kathleen Greenfield this team has put together an electric piece that will have you laughing from start to finish. 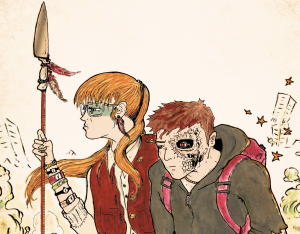 At first glance the script seems simple – two young teens think the apocalypse is coming and want to warn everyone – but what emerges is a deep discussion about the concerns of youth regarding global issues, a beautiful and complex friendship, hilarious dramatic reenactments, ukulele/xylophone duets and much, much more!  Whether they are discussing the toxins infecting our bodies, sustainability, Monsanto or endangered wildlife, it is informative without being preachy.

The staging of this production is absolutely genius.  The team makes excellent use of the space by splitting it with a make-shift scrim, allowing for shadow work and projections.

Ingrid Hansen as Kit is one of the best performers (if not the absolute best) I have ever seen at the Ottawa Fringe.  She is a ball of energy with flawless comedic timing, dynamic physicality, and electric eyes you cannot peel yours away from.  Rod Peter Jr. as the quiet and very shy Jane is the spaghetti to Kit’s meatballs.  Despite his character’s introverted nature, Peter is never lost beside the in-your-face intensity of Hansen that a weaker performer would not be able to stand up to.  His depiction of the delicate Jane is endearing while still being hilarious and complex.  Together the two create a dynamic team, each taking their time to shine and supporting each other from start to finish.

I cannot recommend this show enough, everyone will be talking about it for Fringe festivals to come, so don’t be left out of the fun!