Women Who Shout at the Stars: Review

Women Who Shout at the Stars

Go see this play. When you do, you’ll have the privilege of watching a stellar performance by writer/actor Carolyn Hetherington as she shares the long lives of three strong women. The show benefits from the dramaturgy of Judith Thompson, and the experience of Hetherington, as the vocal and physical quirks of these female characters ring absolutely true. 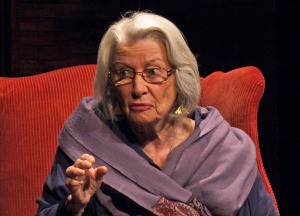 Hetherington sheds bits of herself marvellously about the stage in three distinct guises: Carolyn, her mother Gwen, and Carolyn’s cockney nanny Edie. We discover their entwined yet distinct experiences of the world’s sadnesses and joys as Hetherington winds the audience up in her tale with her stirring and deliberate delivery. Never has a dropped ribbon rung so strongly with emotion, or the desperate clutching of a tumbler revealed so much about a character. I was further impressed with the subtle but strong physical distinctions that separate (for example) Edie’s slight shake as she grips a teacup from Carolyn’s firm grasp on it. It was great to see the same object used merely for its intended purpose in such revealingly discrete manners.

If I had any criticism to offer (and it’s more of a quibble, really) it would only be that Hetherington seemed to suffer from a few opening-night jitters during the first few minutes of the play; the scarf she used to help mark the differences between characters with great success later in the play seemed to lie forgotten through a few transitions at the beginning. Hetherington introduced this tool effectively, but seemed to briefly neglect its use. This small miscue in the use of a visually prominent object with such an otherwise clear purpose led me to a couple of moments of confusion about which of the three characters was speaking, despite their distinct manners. That said, it certainly didn’t detract from the overall quality of the show, and the other 57 minutes of the performance made up for my distraction many times over.

If you have a desire to witness a skilled actor as she embodies three true-to-life humans, while navigates a continuous and timely alternation between profound humour and deep emotion, (and really, who doesn’t?) this production is a must see in the festival. So go. Go see it Sunday. Or Tuesday. Whenever you can.