Mo’ Money, Mo’ Problems: The Burden of Self Awareness

Mo’ Money, Mo’ Problems: The Burden of Self Awareness

In the world of theatre, George F. Walker is definitely one of Canada’s greatest exports. Being one of the most produced Canadian playwrights on both national and international stages, it is really no surprise then that he is also the most performed playwright at Ottawa’s own Great Canadian Theatre Company (next season’s Moss Park bringing the show tally to an “even dozen”). Finishing off GCTC’s season this year is the world premiere of Walker’s newest play The Burden of Self Awareness. Directed by Arthur Milner, previously a playwright in residence and Artistic Director at the GCTC, and starring the company’s current AD, Eric Coates, as Michael this production is certainly a fitting way to cap off this season. However, while there are definitely strong elements to this piece, there are other elements that are lacking.

Walker cuts right to the heart of the matter in this new script by introducing the major conflict straight away. Multi-billionaire Michael and pampered wife Judy, played by Sarah McVie, are seeking “marriage counselling” from the shoddy at best psychiatrist Stan, played by Paul Rainville, because Michael has seemingly decided out of nowhere to give up pretty much all of his wealth to the extreme alarm of his wife. The plot thickens as we are introduced to the other characters who find themselves invested and entangled in Michael and Judy’s problems whether they like it or not and through a number of twists and turns the nasty truth is ultimately revealed.

This script is seriously funny with its dark humour and its deeply flawed characters who are all harbour varying degrees of degeneracy. The first act is quite strong as we dive into the lives and the mutual relationships between these five characters. On the other hand, the second act doesn’t seem to have as much punch, despite featuring attempted and committed murders, and the events which border on improbable do so without the saving grace of Walker’s characteristic dark comedy which was so present in the first act. The play is ultimately a commentary on contemporary society: it questions our needs and wants versus our moral values. It is a solid portrayal of entitlement and privilege and how these two things can destroy a person if left unchecked.

The directing by Milner I thought, for the most part, to be sufficient. The play is well cast with good comedic timing and some nice stage pictures. The heavy use of blackout transitions, however, gets tiring and often cuts off the momentum of the piece itself. Further, while the staging is not bad, it is disappointing because all of the action happens on stage left or stage right. Centre stage is rarely, if ever, used which limits the positions of power an actor can hold on stage. Even further, there is a lot of sitting in this play and by Act Two I find myself desperate for more variety in movement. 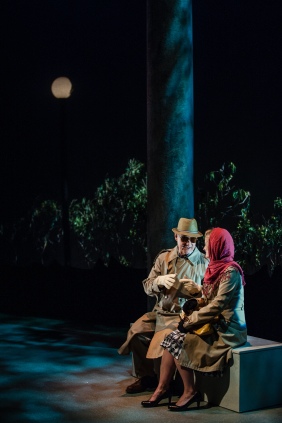 The acting is definitely the strongest in the first act. The cast seemed to really understand their characters and the tempo of the script (despite being cut off by blackouts every five minutes). Conversely, I felt that through the entire second act the actors started to play up the joke as opposed to just playing the scene. For example, when Phil the private investigator, played by John Koensgen, is recounting his story about how he lost his job as a news anchor because he couldn’t stop thinking incredibly salacious thoughts about one of his fellow reporters during a live broadcast. In this moment the text should do all the work and there really doesn’t need that much acting put onto it, yet I found Koensgen’s delivery so amped up and ridiculous that, for me, it took all the humour out of the text.

Apart from these minor issues in the second act this cast is fairly solid and work well together both as an ensemble and as individuals. Coates, in his GCTC acting debut, plays his character exquisitely deadpan and had me more often than not in stitches. Similarily, Rainville as the failed psychiatrist is perfectly pitiful, and brings much hilarity to his scenes. McVie is strong as Michael’s deranged wife and she brings a lot of energy and presence to the stage. Koensgen is excellent in the first act, though, as previously mentioned, tends to ham it up in the second. Last but not least, Samantha Madely as Lianne really holds her own as the hooker with a “heart looking for gold”.

Overall, I think this is a decently done interpretation of a brand new script. Certainly there are a few kinks, both textually and directorially, that still need to be worked out but I think this specific production works for the GCTC and, most importantly, their target audience. This is definitely one of the stronger shows in this past season and a decidedly good note to end it on. Catch it while you can! Rated M for Mature.

Ticket information can be found here.

The Burden of Self Awareness