Sitting one hundred years from its inaugural premiere at the famed Teatro alla Scala in Milan, Giacomo Puccini’s Madama Butterfly presented by Opera Lyra (OL) returns to Southam Hall at the National Arts Centre here in Ottawa. This is not OL’s first time staging the popular opera, only this time with powerhouse veterans like soprano Shuying Li  (playing the title role- Cio-Cio San) and James Westman (playing the U.S. Consul-Sharpless), who are no strangers to Luigi Illica and Giuseppe Giacosa’s libretto. OL’s Madama Butterfly is a tragic tale of seduction, betrayal, and, ultimately, abandonment. While this production is no doubt technically strong (to my untrained ear), the emotional follow-through seems to be lacking.

Our story takes place in a small village outside of Nagasaki, Japan at the turn of the twentieth century where we are introduced to the American Naval Officer, B.F. Pinkerton (the B.F. stands for Benjamin Franklin of course), played by tenor Antoine Bèlanger. Pinkerton is inspecting the house he has just rented from the matchmaker Goro, played by fellow tenor Joseph Hu, who has also supplied him with a suitable (and convenient) wife during his stay in Japan. The Naval officer agrees to rent the house (and the wife) for 999 years provided that he may cancel at any time, or rather, until he can find himself a “proper American wife”. Goro agrees eagerly and so sets the stage for our tragedy. Despite both the warning from Sharpless against toying with the innocent girl’s obvious affections and the condemnation of Cio-Cio San by the remaining members of her family, Pinkerton and his Butterfly enter into matrimony on quite the foreboding tone. 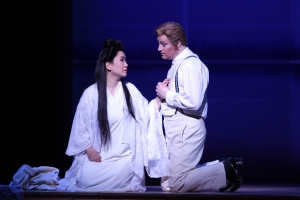 The set, designed by John Conklin, is both appropriate and mindful of period, place, and culture. Large wooden frames supporting paper walls, made up of sliding doors, allow for the internal configuration of the entrances and exits depending on the scene. Traditionally, Japanese people at this time sat on cushions or on the floor, though with the incorporation of a small table and a few small chairs, we can see how Western culture has started to integrate itself on a global scale. Other than these few set pieces which are moved on and off stage when necessary, the stage itself remains pretty bare for the majority of the show. Yet, because the stage is not weighed down by superfluous furnishings or decoration it maintains an elegant simplicity and openness which keep the audience eye on the performers at hand.

The stage really comes to life, however, underneath Stephen Ross’lights which range from intense colours of pink and red to softer washes of blue and purple. It seems that the texture of these softer washes of light are reminiscent of the Japanese brush painting we see at the very beginning of the show. The harsher tones are effective in adding some drama to this, otherwise, minimalistic set. The white paper walls reflected the lights beautifully and they really supplemented the emotional intensities within a scene.

When it comes to the actual performance, I must admit, I am a little torn. Certainly, these performers are incredibly talented (and well-trained) vocalists as many of the duets and arias leave goosebumps on the skin, particularly Li’s rendition of the famous Un Bel di Vedremo which elicited a well-deserved “Brava!”from somewhere in the audience. Yet, unfortunately, I did not feel invested in these characters or the story itself. Perhaps this is just common of all operas where the dramatic form places more emphasis on the beauty of the orchestral music and the vocal stylings of the libretto, although I would make the argument that perhaps this sense of detachment also stems from some lacklustre staging and scene work by stage director Francois Racine. The biggest ‘perhaps’, however, might be that it’s just personal preference.

Li and Westman are definitely stand-outs in this show, owning the stage every time they enter a scene and commanding presence. They are also the most believable in their characters, not to say that their acting was the most realistic, but that I believe the characters they are portraying within this opera’s given universe. This comfort within their roles must have come from the actors’past experiences as Westman has played Sharpless over 75 times now and Li has reprised the title role for the last decade.

In sum, I think that this is a commendable production by Opera Lyra and is a great show to end their season on. While the story itself might not blow you away, it certainly will not disappoint you either and seeing Li as Madame Butterfly is a performance that should not be missed.

Valarian Ruminski as The Bonz